It is a fact that as population grows, the metropolis are expanding. People living in urban areas were no more than 29% by 1950, however in 2014 the number achieved the 54% and the proportion is increasing at a very rapid pace. The percentage is expected to grow up to 60% before 2025. More and more inhabitants choose to live in cities and experts have calculated that 1.3 million people are currently moving each week to metropolis. As a consequence, cities are becoming bigger. Nowadays, there are 21 megacities (conurbations with more than 10 million of people), whereas in 1975 there were just 3 (New York, Mexico City and Tokyo).

High density population cities require more water, transportation, place to live, public spaces and energy, and that is why finding solutions is a must. All the answers lie in technology and this is the background idea of “Smart Cities”. According to the European Parliament, ‘A Smart City is a city seeking to address public issues via ICT-based solutions on the basis of a multi-stakeholder, municipally based partnership’.

A large amount of cities have been attracted for this idea worldwide. In Europe, the 51% of cities have implemented or have proposed Smart City Initiatives. Countries with the largest numbers of Smart Cities are United Kingdom, Spain and Italy, although ones with the highest percentage are Italy, Austria and Denmark.

According to a Cisco study, the most important motivation for becoming a smart city is to improve the infrastructure, with the desire of being a better place to live. Nearly a third (31.6%) of the city officials identified it as the top reason. Another opportunity to bet for a Smart City is converting the metropolis more attractive for business and for economic development. Achieving these goals is also important because the city would create new short-term jobs, as well as enhance the prospects for long-term jobs.

Most of the cities have started the transformation. 49.9% of city official’s claim they are undertaking improved IT and communication systems projects, and 47% of them also say they have energy efficiency and sustainability initiatives in progress. These are the two most extended areas among all the cities’ projects.

On the other hand, 46.4% of local administrations also started initiatives for citizen engagement and empowerment; 42.1% for improving open data and government transparency; 40.3% projects about transportation, parking and traffic management; and 38% are taking actions regarding public security and safety.

However, the major part of the cities (61.2%) are still studying the concept of smart city and the possibilities that this concept offers. Another 18.7% have initial pilot plans, while 13.9% have deployments already implemented. Finally, just the 5.5% of cities have completed several projects. 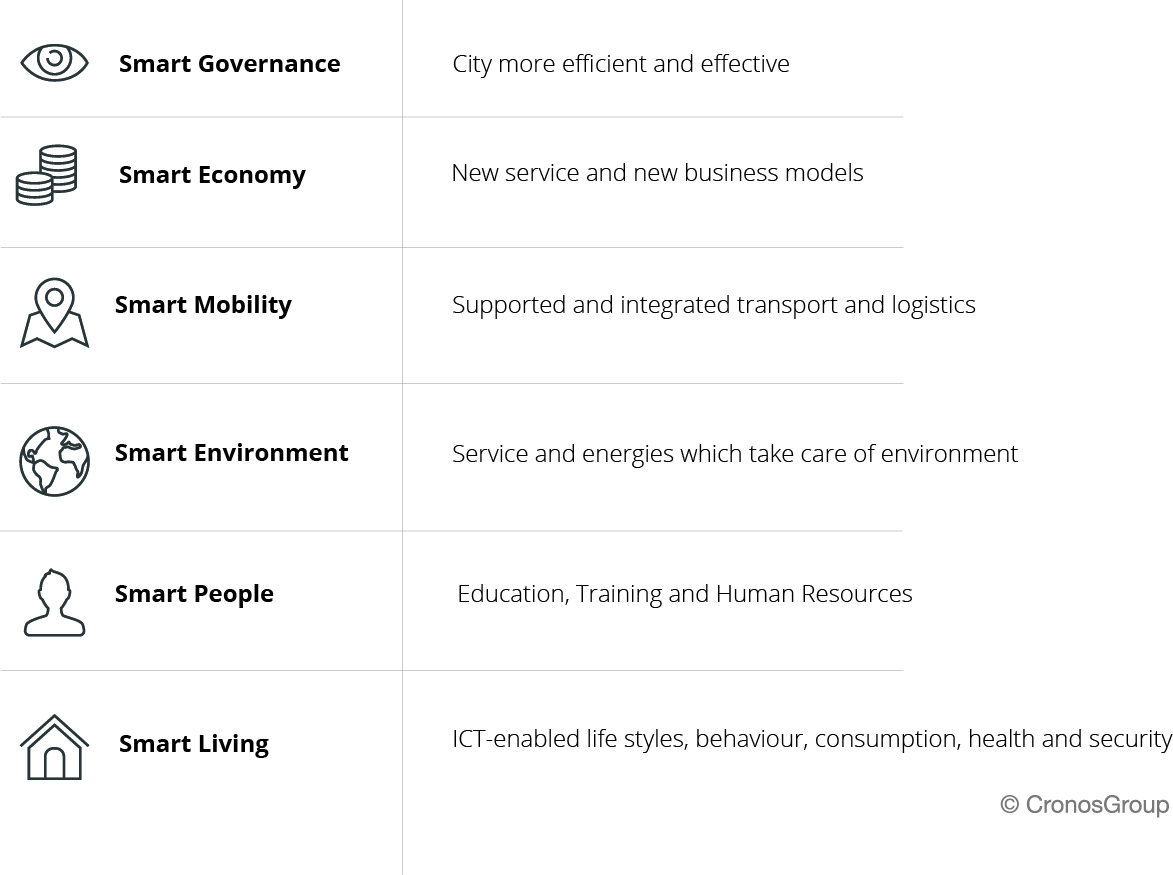 Telecom industry has an exceptional role

Telecommunications are an indispensable part of smart cities. These new metropolis require high-speed and high-capacity communication networks for services such as:

Who Participates in the Development of Smart City?

According to Frost & Sullivan study published in Forbes, there are four types of smart city participants. One contributor will assume one or more roles, but telecommunications sector has presence in all of them.

A big question is: who is leading the transformation from an old city to a new one? According to the European Commission, in the 36% of the occasions, public authorities have the leading role. On the other 26% of times, are the business who lead the transformation. To a lesser extent, there are academic/research institutions (16%), NGOs (6%) and private individuals (2%). That numbers shows the necessity of the relations between public institutions and private ones, especially in the time when global economy is decreasing.

As it happens in all projects, smart cities also have obstacles. One of the most critical barrier is funding, as this was the top answer for an internal challenge (35.4%), but also was the most answered problem as an external one (26.2%). Cities are concern for securing funding to cover the total costs for the smart projects, as well as for securing funding options that match the duration of the project, according to Cisco.

Another important internal challenge is the lack of cross-departmental coordination and alignment on priorities. On the other hand, a significant external problem is the fact that citizens usually are not engaged with projects, because they do not see clearly the benefits.

The Smart City concept is to convert cities to platforms, where citizens could live better in all the areas. Telecommunications has an exceptional role in all process because that will require a high speed, high reliability and high availability, and must also satisfy new requirements, with the aim to provide better services of Internet, Voice and Video services. In addition, and as happens with the Internet of Things’ concept, Smart Cities are going to need huge data capacity in order to keep all the information gained by the cities. Telecommunication systems has to be able to connect all manner of things, including human-to-human, human-to-machine and machine-to-machine connections. Frost & Sullivan estimated a combined market potential up to $1.5 trillion worldwide for the smart city market. Saying that, telecommunications has a big business opportunity here. Are they ready for take the chance?