Smartphones and tablets have been, for the last five years, one of the most popular Christmas gifts worldwide. 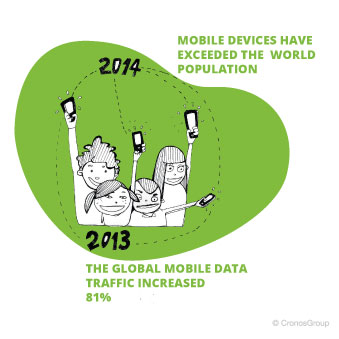 According to a Cisco study based on Global Mobile Data Traffic, during this 2014 the number of mobile-connected devices has exceeded the number of world population. This trend has been reflected in the Internet use: last year, the global mobile data traffic increased 81%. But this tendency does not have symptoms of changes. The most important e-commerce companies and technological business agree that during this Christmas, mobile devices will continue on the top of the most popular gift lists, where is going to appear smartwatches as well.

Smartphones and Tablets have changed the user’s attitudes when Christmas is coming. More and more people preferred online devices for shopping during the holiday. Statista has studied the percentage of consumers who expect to purchase Christmas gifts online. This study shows that 24% of the United States users are going to shop completely online, whereas 22% population 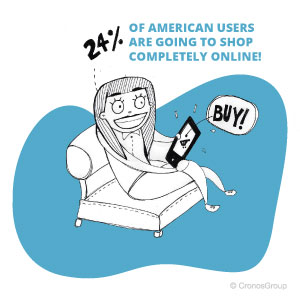 is going to physical stores and online business equally. These numbers coincide with another survey from Deloitte, which says 45% US users will buy through Internet. The main reasons of this on-line trend are the long lines (40%) and the traffic (26%). 72% of people who own smartphone and 69% who own a tablet plan to use them during the all process, although only the 33% of the users affirm their favorite form to buy Christmas gifts is through a tablet and another 18% prefers using their smartphone. However, a major part of people use mobile devices to know store locations and to compare prices. 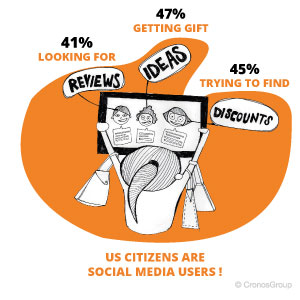 50% of in-store retail sales are going to be influenced by digital interactions during Christmas time. American users are regular users of social media networks and, for that reason, 45% of the population is going to use them during the shopping process. Among these, 47% is getting gift ideas from the networks, 45% is trying to find discounts and 41% is looking for reviews and recommendations for stores or specific products.

Statista also predicts which channels are the ones with more growth during Christmas sales in the United Kingdom and Ireland this year. Tablet devices are expected to grow the most, with an increase of 35%, followed by Internet (excluding mobile). During all season, smartphone traffic is expected to grow 18.5%.

The best time for APPS

Christmas is also a great time for downloading apps from mobile devices. Yahoo found, last year, that Christmas downloads grew 91% compared to a non-holiday day in the first three weeks of December. And, compared with the  Christmas of 2012, last year downloads went up 11%. The study also showed that, as it happened on Thanksgiving, games and social apps were downloaded at twice the rate an average day of the month. Other app categories with a largest increase were media and lifestyle applications.

A large number of applications are downloaded thanks to gift cards. Actually, this kind of present is the second most gifted item, according to Deloitte. 43% of the US population plan to give cards, with an average spend of $159 per person. 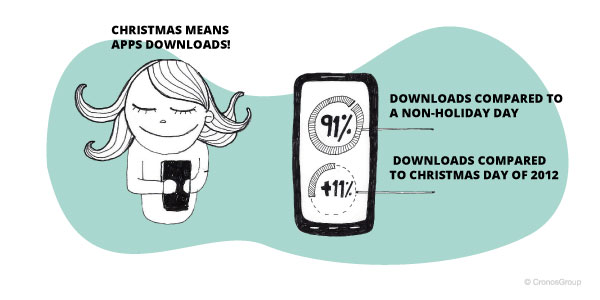 During Christmas holiday there have been, traditionally, an increase of personal communication. Christmas postcards are now old-fashioned, although there are still people who enjoys sending and receiving written cards. SMS were the messages kings’ during Christmas Day, and New Year’s Eve. Year after year lines had been collapsed with millions of text messages worldwide, when mobile Internet was not that popular. But, Mobile Internet have changed things dramatically.

According to a study from IBM, during last Christmas Day, the 48% of online searches were through handheld devices. Mobile traffic online on 25th December of 2013 doubled compared the same day in 2012, mainly the increase was of 28.3% respect a year before.  The same happened with New Year’s Day when citizens use to call their family and friends for wishing a good start of the year. The Internet traffic worldwide grow 39.05% the 1st January 2014, in contrast from the first day of 2013.

Spain is a clear example of those tends. 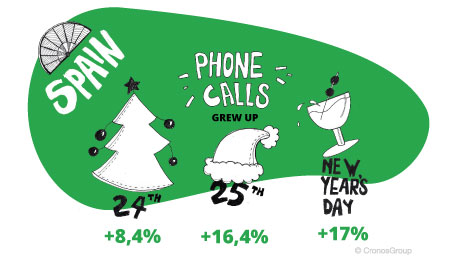 According to Spanish mobile networks, between December 24th and 25th, there were an increase around 40% in the mobile internet traffic. The same happened with the phone calls, which grew up 8.4% on the 24th and 16.4% on the 25th. The rise was even more important during New Year’s Day. Meanwhile the phone calls increased 17%, the data grew up around 50%. SMS also increased during the festivity, Spaniards sent an 81% more SMS than another non-holiday day. Nevertheless, this system is becoming obsolete for a person-to-person communication, because citizens preferred to send messages through instant messaging apps. That is why “WhatsApp” messages increased a spectacular 129% and converted into the most popular way of wishing a happy new year in Spain. 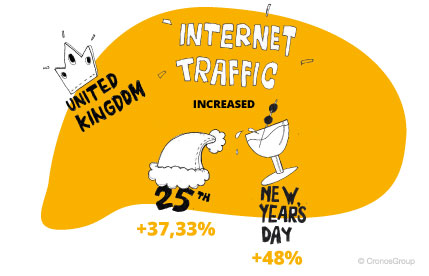 In the United Kingdom the situation was similar, Internet traffic through mobile devices increased 37.33% on Christmas Day and around 48% on New Year’s Day. What it is also interesting is to know when retailers expect more online traffic. According to them, the most important peak traffic, on this Christmas Day, would be between 8 and 10 PM, with the 27.8% of the day’s traffic, followed by 22.2% after 10 PM.

According to O2, during last New Year’s Eve, its customers sent over 385 million text messages and made 200 million phone calls. 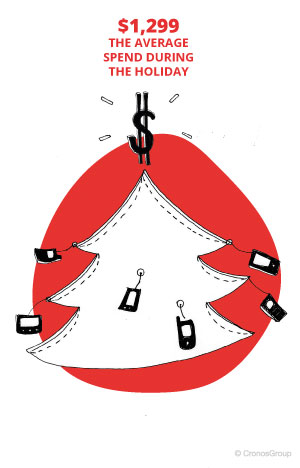 As Deloitte predicts, consumers in the US will increase their spending by 13% this Christmas. This number means that the Americans will spend, in average, $1,299 (one thousand two hundred and ninety nine) during the holiday. Gifts will continue to be in the top of the expenses, with $458 per person, which will significate a growth of 9%. A large part of the presents will be smartphones and tablets. Mobile devices are becoming the center of the Christmas, not only for the gifts, but also for the amount of time spent on it, the average time per person in a day is 195 minutes. More and more often consumers use their mobile devices when they want to buy items. People also need the smartphone for wishing the typical “Merry Christmas and a Happy New Year”, whether through apps or calls.

Selfies have been acclaimed worldwide and, especially youngsters, send their photos to their friends through Internet Apps like Viber or Snapchat. In addition, Instagram is becoming more and more popular and, last week, overtook Twitter in user numbers. It’s calculated that 67K photos are uploaded every minute, in a non-holiday day, across the world. That represents a great data use and the number increase hugely during festivities like New Year’s Eve. For all of those reasons, mobile data expects a huge increase during the holiday, as it happened in the recent years. That’s why mobile devices will continue to be the star of this Christmas.