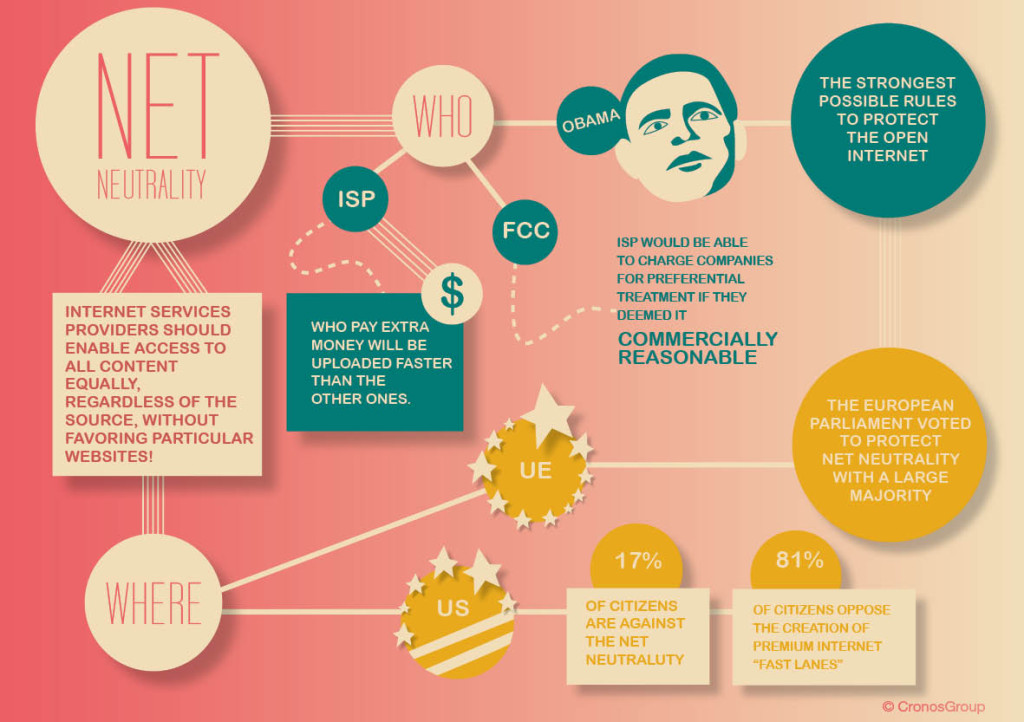 US media have talked about “Net Neutrality” throughout the year because it has become one of the most important, as well as controversial, issues for Obama and for its administration. This principal’s idea is that Internet service providers should enable access to all content equally, regardless of the source, without favoring particular websites.

There are two clear positions about the importance to drive a net neutrality or not. Some of the Internet Service Providers (ISP) are totally against net neutrality and support “fast lanes”: the websites from the companies who pay extra money will be uploaded faster than the other ones. Contrary, there are several users associations, like The Internet Association, who believe Internet “should be free from censorship, discrimination and anticompetitive behavior”.

Without net neutrality rules, ISPs can provide slower speeds for some services. That is what happened with Comcast and Netflix. Last year, the ISP requested Netflix more money in exchange for a promise to deliver movies smoothly over the Internet to its customers. With a non-answer from Netflix, the speeds on the service providers decreased hugely, until the multimedia platform accepted a deal. That case shows that, in absence of net neutrality, companies can buy priority access to ISP customers. Wealthiest companies like Google, Twitter, Facebook or Netflix, can afford these requirements and that will suppose a clear defenselessness to their potential competitors. Although for smaller companies, and startups it will be a definitely competitive disadvantage for their services, shall they fail to pay an extra for delivering of their services to the common public?

Another problem would be about how the industry could be protected from anticompetitive practices managed by the incumbents who provide Internet services to the end user. For the Voice industry for example, it is well known that, in the past, major incumbents in several countries, blocked the voice channels to services delivered by VoIP OTTs, such as Viber, Skype, Vonage among others. This is a practice that it is in disadvantage to have a better impact in their economy and services, not only for the companies, but as well for the users that are coping with new technologies.

Institutions such as the Federal Communications Commission (FCC) have changed their opinion during the year. Although they initially wanted to “preserve the Internet as an open platform enabling consumer choice, freedom of expression, end-user control, competition, and the freedom to innovate without permission”; in May, the FCC said ISP would be able to charge companies for preferential treatment if they deemed it “commercially reasonable”. It was not until the 10th of November when President Obama explicitly called for “the strongest possible rules to protect” the open Internet. He also came out against the proposals to create fast lanes for the web.

Nevertheless, if these companies accepts a deal with ISPs, their services could be more expensive. According to a University of Delaware research, 81% of USA citizens oppose the creation of premium Internet “fast lanes”; meanwhile only 17% are in favor. The study says that critics argue that a non-regulation would rise prices for customers.

People who are against the creation of two different lanes is strongest among those who say they have heard a lot about the proposed rules (87%), who represents the only 10% of the citizens. However, the most part of North Americans admits they have heard little or nothing about the issue.

In Europe the situation is different. During the first quarter of the year, the European Parliament voted to protect net neutrality with a large majority. The resolution explained that providers will only allowed to slow or block Internet access to enforce a court order, with the aim to be transparent, non-discriminatory and proportionate. However, there are countries who do not support the law project, who is not even wrote up yet. This is the case of United Kingdom, which has threatened to ban the draft law. On the other hand, there is the Netherlands, the first European country to approve a law which defend net neutrality. Other countries with similar regulations around the world are Chile, Ecuador and Brazil.

Net Neutrality is a huge issue around the world. ISPs firms, companies and institutions should sit down, talk and reach an agreement. Internet is the most important technological discovery in the last three decades. As the International Telecommunication Union (ITU) announced, almost 44% of households globally will have Internet access at the end of 2014; 78% in the developed world and 31% in the developing countries. That numbers will increase largely in the next years, which means that, sooner or later, the agreement has to arrive.